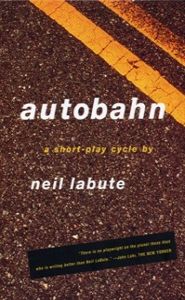 
In Autobahn, Neil LaBute's provocative collection of one-act plays set within the confines of the front seat, he investigates the tentative apprehension that surrounds the steering wheel.

Each of these seven vignettes explore the ethos of perception and relationship -- from a make-out session gone awry, to a kidnapping thinly disguised as a road trip, a reconnaissance mission involving the rescue of a Nintendo 64 to a daughter's long ride home after her release from rehab.

The result is an unsettling montage that gradually reveals the scabrous force of words left unsaid while illuminating the delicate interplay between intention and morality, capturing the essence of Middle America and the myriad paths which cross its surface.
REVIEWS:

"Nail LaBute is the first dramatist since David Mamet and Sam Shepard -- since Edward Albee actually -- to mix sympathy and savagery, pathos and power."