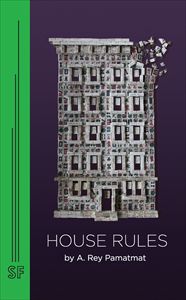 
Rod thinks the game is fixed. Momo's still learning the rules. Twee doesn't think winning is enough. JJ hates his hand. And why the hell is Henry still playing? Two families (and some guy named Henry) panic with hilarious and heart-breaking results when they realize their parents won't be around forever. Can anybody prepare for the inevitable moment when they're the ones left holding all the cards?
REVIEWS:

"A. Rey Pamatmat's play is a web of love and conflict between cultures, and parents and children, that is never sentimental or schmaltzy, but funny and unapologetic."

"Mr. Pamatmat has compelling ideas about human psychology and dramatic structure... flashes of surprising truth, particularly in the sibling interactions."

"Pamatmat's story is well told and there are many truths to be found... like life, there is not a total resolve for his character's conflicts. Sometimes, self-will and communication fails us. Fortunately, Pamatmat's play does not."

Premiere Production: House Rules premiered in a production by Ma-Yi Theatre Company in New York City in March 2016 under the direction of Ralph B. Peña.