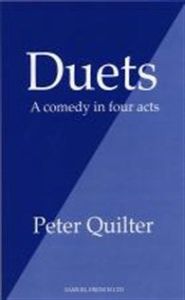 It's Barrie's birthday and his personal assistant Janet is helping him get ready for the party.


It's Barrie's birthday and his personal assistant Janet is helping him get ready for the party. As they discuss getting older, marriage and love (or Janet's lack of it), it becomes clear that she would be quite content to settle down with Barrie. Unfortunately, Barrie is more interesting in men, but that doesn't stop him from booking them both on a cruise as a birthday present to himself.

This play may be performed individually or as the second act in Duets, a comedy in four acts.
REVIEWS:

"This bittersweet quick-change comedy is streaked with pathos and is effortlessly charming, with each character sketched with verve and skill."

"Quilter's understanding of human desires and quirks is on show and probed so endearingly... A warm and funny exploration of love and other bruises."

"Compelling, dense, funny and varied... The language is always beautifully rendered, character-specific, and emotionally satisfying... a play to be treasured!"

Premiere Production: Premiered in 2009 at the Ensemble Theatre in Sydney, Australia. The show has since been performed in over 20 countries.