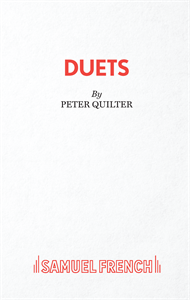 A very funny comedy by the author of Broadway smash End of the Rainbow and the West End hit Glorious!.


A gloriously funny examination of the chaotic world of love, relationships and why the grass is never greener. Duets is a hilarious tribute to the strength and madness of the human heart. Though written to be produced in its entirety with a cast of up to M4, F4, Duets may also be performed as four separate one-act plays, each with a cast of M1, F1. The cast size is flexible.

A very funny comedy by the author of Broadway smash End of the Rainbow and the West End hit Glorious! Four sets of characters, four crucial moments. Jonathan and Wendy are on a blind date and hoping to get it right this time even though they've never gotten it right before; Barrie is not really interested in women but Janet sees that as no reason to stop trying; Shelley and Bobby have decided to holiday in Spain to finalize their divorce whilst drowning in cocktails; Angela is marrying for the third time to the dismay of her brother Toby and amidst a barrage of bad omens and a dress resembling a parachute.

"This bittersweet quick-change comedy is streaked with pathos and is effortlessly charming, with each character sketched with verve and skill."

"Quilter's understanding of human desires and quirks is on show and probed so endearingly... A warm and funny exploration of love and other bruises."

"Compelling, dense, funny and varied... The language is always beautifully rendered, character-specific, and emotionally satisfying... Duets is a play to be treasured!"

Premiere Production: Premiered in 2009 at the Ensemble Theatre in Sydney, Australia. The show has since been performed in over 20 countries.