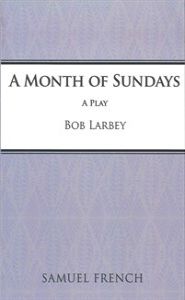 Month of Sundays, A

A comedy about the difficulties inherent in growing old.

A comedy about the difficulties inherent in growing old. Cooper who has gone into a nursing home rather than become a burden on his family, flirts valiantly with the female staff, banters with the other old folks and keeps a close check on his "record of physical deteriorations."

To the painful ritual of Sunday family visits and empty condescension, Cooper and his friend Aylott reply with humour and wit, aware that life can only be endured if treated as a comedy.
A Month of Sundays is Bob Larbey's first stage play, although he is well known for writing many television series such as The Good Life, Please Sir, Get Some In and Ever Decreasing Circles, with his co-writer John Esmonde. His first solo venture for television, A Fine Romance won the British award for Best Comedy in 1982.


Premiere Production: A Month of Sundays was first produced in 1985 in Southampton and was then transferred to the Duchess Theatre in London in February 1986, starring George Cole and Geoffrey Bayldon.