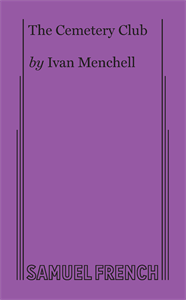 Three Jewish widows meet once a month for tea before going to visit their husband's graves.


Three Jewish widows meet once a month for tea before going to visit their husband's graves. Ida is sweet tempered and ready to begin a new life, Lucille is a feisty embodiment of the girl who just wants to have fun, and Doris is priggish and judgmental, particularly when Sam the butcher enters the scene. He meets the widows while visiting his wife's grave. Doris and Lucille squash the budding romance between Sam and Ida. They are guilt stricken when this nearly breaks Ida's heart.

The Broadway debut production starred Eileen Heckart as Lucille. It was made into a film, starring Ellen Burstyn, Dianne Ladd, and Olympia Dukkakis.
REVIEWS:

"Very touching and humorous. An evening of pure pleasure that will make you glad you went to the theatre."

Premiere Production: The Cemetery Club opened on Broadway at the Brooks Atkinson Theatre in New York City on May 12, 1990. This production was originally presented by Howard Hurst, Philip Rose, Sophie Hurst, and David Brown at the Kennedy Center for the Performing Arts in Washington, D.C., on March 30, 1990. It was directed by Pamela Berlin.