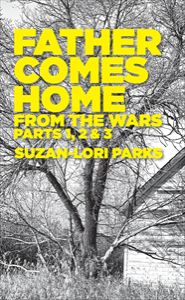 Father Comes Home From The Wars is an explosively powerful drama about the mess of war, the cost of freedom, and the heartbreak of love, with all three parts seen in one night.

Offered his freedom if he joins his master in the ranks of the Confederacy, Hero, a slave, must choose whether to leave the woman and people he loves for what may be yet another empty promise. As his decision brings him face-to-face with a nation at war with itself, the loved ones Hero left behind debate whether to escape or wait for his return... only to discover for Hero, free will may have come at a great spiritual cost.

Father Comes Home From The Wars is an explosively powerful drama about the mess of war, the cost of freedom, and the heartbreak of love, with all three parts seen in one night. Part 1 introduces us to Hero, a slave who must choose whether or not to join his master on the Confederate battlefield. In Part 2, a band of rebel soldiers test Hero's loyalty as the cannons approach. Part 3 finds Hero's loved ones anxiously awaiting his return.

A devastatingly beautiful dramatic work filled with music, wit, and great lyricism, Father Comes Home From The Wars is an epic tale about holding on to who we are and what we love in a country that both brings us together and rips us apart from one of America's most powerful writers.
REVIEWS:

"Extraordinary! By turns philosophical and playful, lyrical and earthy, Suzan-Lori Parks's new play swoops, leaps, dives and soars across three endlessly stimulating hours, reimagining a turbulant turning point in American history through a cockeyed contemporary lens. The finest work yet from this gifted writer... The wonder of Ms. Parks's achievement is how smoothly she blends the high and the low, the serious and the humerous, the melodramatic and the grittily realistic. At once an epic poem, a moving personal drama about one man's soul struggle, and a seriocomic mediation on liberty, loyalty and identity."

"Thrilling! A masterpiece. Heartbreakingly individual, in just the way that history itself is... Suzan-Lori Parks exquisitely twists the plot. She makes us feel as if we are seeing the dreadful dilemmas not just of slavery but of emancipation for the first time."

"Grade A... Stunning. That rare work of art that bears the heavy burden of its subject matter, but carries it lightly... Suzan-Lori Parks brings the full force of her dramatic power. She elevates her themes with echoes of classic literature while at the same time doubling down on comedy."

"Brilliant, beautiful & stunning... This haunting work is funny and tragic, whimsical and lacerating, poetic and poignant, navigating its radical tonal shifts with fluidity and grace. It plugs historical experience directly into the socket of contemporary life."

Premiere Production: Father Comes Home From The Wars (Parts 1,2, & 3) was developed at the Public Theater Lab in 2009, and the play received its premiere production in 2014 at The Public Theater, under the direction of Jo Bonney.