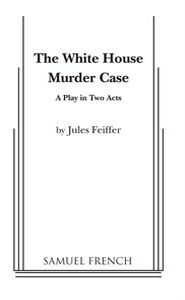 Incisive satire is aimed at the war posture of the United States of the future.

Incisive satire is aimed at the war posture of the United States of the future. This year's war is in Brazil where an American poison gas attack backfires.

On the eve on an election, the President is worried about how to explain the presence of the gas in the U.S. peace arsenal. While a staunch old general, blinded and crippled by war, demonstrates by his stoicism the idiocy of outmoded codes and the cabinet concocts a cock and bull story for the people, the President's wife is murdered.
REVIEWS:

Premiere Production: The White House Murder Case was first performed at Circle in the Square, New York, on February 18, 1970 and was directed by Alan Arkin.