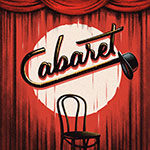 The scene is a night club in Berlin, as the 1920's are drawing to a close. The Master of Ceremonies welcomes the audience and assures them that, whatever their troubles,they will forget them at the Cabaret. His songs provide wry commentary throughout the show. On the train to Berlin we find Cliff, a young American writer, and Ernst, a German who surprises Cliff by putting his briefcase among Cliff's luggage at the German border. History is in the process of being made.
Musical numbers include It Couldn't Please Me More, Willkommen, Cabaret, Don't Go, The Money Song and Two Ladies.
We find Cliff on the train again, now leaving Berlin alone. He writes about Sally and the people of Berlin leading up to the Third Reich. It has been a tumultuous and heartbreaking era.

"Welcome to the Cabaret" sings the Emcee of the Kit Kat Klub through painted lips, as the people of Berlin 1929 join him. Three Broadway versions of this show (1967, 1987, 1998) follow the same story and share more songs. Numbers only in the Revised 1987 version include I Don't Care Much, Don't Go and The Money Song. All three versions include Willkommen, Perfectly Marvelous, Tomorrow Belongs to Me, Cabaret, Don't Tell Mama, It Couldn't Please Me More and Two Ladies.

It is Fraulein Schneider's house. She rents Cliff a room for half its  usual price. She shrugs her shoulders. She's lived through so much -- nothing is that important (So What?).

Cliff takes out his typewriter. But it's New Year's Eve. Ernst has mentioned a cabaret called the Kit Kat Klub. At the moment it seems much more inviting that the typewriter.

The Kit Kat Klub is a cross-section of Berlin night-life: thronged with fat, middle-class Germans -- prostitutes -- homosexuals -- the flotsam and jetsam of a doomed city.

As Cliff enters the Emcee introduces Sally Bowles, a young English girl. As Sally sings Don't Tell Mama, it becomes apparent that her voice is the main reason for her employment. Max, the club owner, keeps looking at her in a proprietary fashion. But Sally is looking at Cliff.

Sally arranges to meet Cliff. He invites her home, but she refuses -- explaining that "Max is most terribly jealous."

Months pass. Cliff is getting nowhere with his novel -- but enjoying life with Sally. But Sally is pregnant. Cliff is upset -- then happy. Ernst arrives to offer him a job smuggling a briefcase into Germany. Needing the money, Cliff accepts.

Everyone in Berlin earns money in strange, illegal ways, the Emcee announces (The Money Song).

Cliff arrives at the party with the smuggled suitcase. He hesitantly gives it to Ernst, who wears a swastika arm-band. Ernst decides to leave, but Fraulein Kost lures him back by singing a Nazi song (Tomorrow Belongs to Me). When all the guests join in exultantly, the party suddenly turns sour.

They have a savage argument. Sally disappears -- returning the next day. She's had an abortion. Heartbroken, Cliff prepares to leave alone, secretly hoping she will join him in Paris. But Sally informs him she's always hated Paris. Cliff sadly closes the door behind him.

In the train Cliff begins to write about Sally and the people in Berlin as, in his memory, they surround the compartment -- singing, dancing, living on the toboggan that led to the Third Reich.


Premiere Production: Cabaret was revised for Broadway, first in 1987, where it played for 261 performances at the Imperial and Minskoff Theatres.