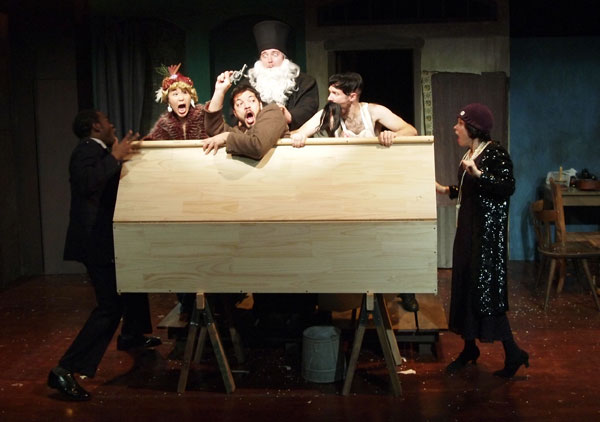 
Semyon Semyonovich has a problem: he thinks his life isn't worth living. Unfortunately, everyone he knows agrees with him! But when he decides to end it all, he finds himself the center of attention, urged to blame his misery on love, philosophy, and even politics.

When a glorious death is the most popular commodity in town, how much will a simple suicide cost? A saucy Soviet satire. Seriously.
REVIEWS:

"This rarely produced gem is a door-slamming farce wrapped inside a humanist attack on the Soviet regime... As comedies about mortality go, this one is rather joyful."

"So, if The Seagull, ending in its main character's tragic suicide, is a Russian comedy, then what is a Russian farce? Well, equally as suicidal, but unrelentingly wacky... Robert Ross Parker's slam-dunk adaptation of Nikolai Erdman's banned 1928 Communist-era play The Suicide, is a boisterous rebel of a comedy with a deceptively masked, pointed intellect."

"If you think thought-provoking theatre that's literally about important issues like life and death, economics, politics, and the social contract can't be wildly entertaining, well, here's Robert Ross Parker to prove you wrong."