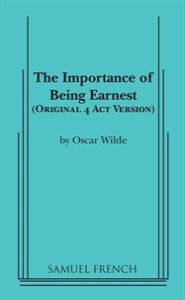 Importance of Being Earnest, The (Original 4 Act Version)

The fun in the scene Wilde deleted is better than any living playwright can do.

Originally written in four acts, this stage classic was cut when first produced to provide time the obligatory curtain raiser of that era. Acts II and III were condensed into one act and two characters were omitted from the last act.

In 1903 a Leipzig published issued a German translation of the four act play and from it the original English version, which was successfully produced at London's Old Vic, was reconstructed.