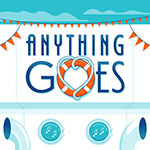 The age-old tale of Boy-Meets-Girl and the complications which ensue intrigue every audience, and no musical puts it on stage better than ANYTHING GOES. This show is an amusing story wrapped around one of Cole Porter’s magical scores.
Two versions of it are available for presentation. The 1962 version and the 1987 Beaumont version are each based on the same story. Both may be accompanied by a piano, a small instrumental combo or a full orchestra. The 1987 Beaumont version has twice as much dance music as the 1962 version, and the orchestration features a shipboard sound derived from the utility band and less-than-ideal acoustics on board.
Terrific Cole Porter songs in both versions include It’s De-Lovely, Friendship, I Get A Kick Out Of You, All Through The Night, Anything Goes, You’re The Top and Blow, Gabriel, Blow.

In addition the 1962 version includes Take Me Back To Manhattan and Let’s Misbehave.
It’s a wonder that all the romances are sorted out and disaster is averted aboard the magical ship where ANYTHING GOES!


Before this show starts our hero and heroine, Billy Crocker and Hope Harcourt, meet at a party one hot summer night in the early 1930's. Hope is a pretty girl, with an overbearing mother who wants her daughter to marry an English Lord. Billy is a young man just beginning his career on Wall Street. A leisurely drive through Central Park and a chaste kiss put the finishing touches on an evening that speaks of promise. Somehow, Hope slips away without giving her name and address to Billy.

The story begins at the New York sailing of the Ocean Greyhound AMERICA bound for England. Everything takes place aboard the ship. It is customary for members of the press to take photographs of the passengers for the ‘Society’ sections of newspapers before a ship sets sail. Of particular interest to the ship’s reporters is Reno Sweeney, famed Evangelist-turned-Nightclub singer, with her four beautiful Angels – backup singers. Unfortunately she appears to be the only celebrity on board. Other passengers photographed include Elisha Whitney (Wall Street executive and Billy Crocker’s boss), Sir Evelyn Oakleigh (a rich English Gentleman), Miss Hope Harcourt (American debutante and Evelyn’s fiancée), Mrs. Wadsworth Harcourt (Hope’s mother), Bishop Henry Dobson (a minister), and Ching and Ling (two of Bishop Dobson’s Chinese converts).

Billy Crocker comes aboard to drop off his boss’ passport. On board he runs into Reno, who is an old friend. Billy, as it turns out, is the same young man who drove around Central Park with Hope Harcourt, and who has been searching for her unsuccessfully ever since. Reno greets Billy warmly, and she tells him how she gets a “kick” whenever they meet -You’re The Top. Then the deck stewards begin to call, “All ashore that’s going ashore,” and Billy starts for the gangplank. He is just stepping on it when a girl appears: the splendid girl with whom he rode around Central Park. “Are you sailing?” she asks. “You bet I’m sailing” is his reply. And the ship sets sail -Bon Voyage.

There is another celebrity sailing, but he is very much under wraps. “Moonface Martin,” a onetime ship’s gambler and “Public Enemy 13,” is hiding out on board disguised as a Minister. This “thirteen” has brought him a succession of bad luck, and he is determined to move up to the 11 or 12 spot. Billy wins Moonface’s friendship by inadvertently identifying Bishop Henry Dobson as Moonface to the FBI. The innocent Bishop ends up in the ship’s brig. Moonface shows his gratitude by giving Billy a ticket and passport, intended for his friend Snake Eyes, for the trip. Snake Eyes, number “one” on the “wanted” list, had been warned against sailing. His companion, Bonnie, does set sail and spends time with Moonface.

The first evening Billy finds out that Hope is engaged to Sir Evelyn. The British gentleman’s lack of romance and upset stomach give Billy an opportunity to be alone with Hope all night -It’s Delovely. When he gets back to the room he and Moon are sharing the next morning, Billy realizes that his boss, Whitney, is their neighbor. Moon steals Whitney’s glasses, so Whitney will not recognize Billy on board. Moon finds out that the authorities are searching the ship for Billy, who they think is the real Snake Eyes. In order to warn his new friend that he is in danger, Moonface admits to Billy that he is not a real clergyman and reveals his true identity. When Billy responds to Moon that he will not turn him in, Moon tells Billy that the ship’s crew thinks Billy is actually Snake Eyes. Billy refuses to hide for the rest of the trip because he wants to see Hope. Bonnie disguises Billy in a sailor’s uniform -Heaven Hop. Moon, Reno and her Angels recognize Billy as a sailor. He explains his predicament to Reno, and she is willing to distract Sir Evelyn; she thinks he is attractive -I Get A Kick Out Of You. Moonface also joins in Reno’s efforts to help Billy win Hope away from the pleasant but lame-brained English Baronet to whom she is engaged -Friendship. Billy has just a few days to win Hope (whose mother is all for Sir Evelyn), the ship’s officers are searching the ship for a man who is the occupant of the “number one” gangster’s cabin, and Billy has to resort to varied disguises that include dressing as a woman, a chef and a man with a beard. The ship’s Purser finally catches up with Snake Eyes and Moonface, but Billy is spared from going to the ship’s jail. All of the passengers except Hope consider Billy posing as Snake Eyes a celebrity, and want him to mingle among them freely-Anything Goes.

The passengers on board celebrate the new celebrity they discovered in Public Enemy No. One, and Bonnie encourages the imposter’s acceptance in Let’s Step Out. Sir Evelyn begins to fall in love with Reno. He speaks romantically to her, and she sings to him Let’s Misbehave. Hope gets progressively more disgusted with Billy’s lie. The Captain instructs Moonface, still undercover as a minister, to perform a service to reform Snake Eyes. Under Hope’s pressure Billy finally confesses he is an imposter, Moonface admits who he really is, and the two end up in the ship’s brig -Blow, Gabriel, Blow.

Billy is obsessed with Hope while in jail. Moonface tries to calm him down with Be Like The Bluebird. The two Chinese converts traveling with the real Bishop Dobson are also thrown into the brig, for gambling. When Hope finally visits Billy there, she tells him of her mother’s plans to have the Captain marry her and Sir Evelyn within hours. The young couple love each other -All Through The Night. Billy must prevent this wedding from happening. He and Moonface trick the converts to exchange clothes with them, and are released from jail in the converts’ places. Billy arrives on deck in time to prevent the marriage ceremony, by embarrassing Sir Evelyn, with Reno’s help. Reno reminisces in Take Me Back To Manhattan. Hope and Billy end up together, as do Reno and Sir Evelyn, Bonnie and Moonface, and Mrs. Harcourt and Mr. Whitney. The only one who is the least bit disappointed is Moonface, who is no longer wanted by the F.B.I.


Premiere Production: ANYTHING GOES opened on May 15, 1962 at the Orpheum Theatre in New York with Eileen Rodgers and Hal Linden as Reno Sweeney and Billy Crocker.