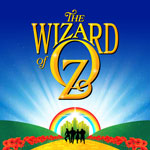 The Wizard of Oz (MUNY Version)

Like so many girls her age, little Dorothy Gale of Kansas dreams of what lies over the rainbow. One day a twister hits her farm and carries her over the rainbow to another world. Come join Dorothy, the Scarecrow, the Tinman, the Cowardly Lion and Toto as they travel the universe of Dorothy's imagination.
The MUNY version is the more theatrically conservative and employs its stage, actors, singers, dancers and musicians in traditional ways to tell Mr. Baum's story. The story and the music are treated by the adapters as elements of a classic stage musical without reference to their use in the film.

A teenage girl, Dorothy, lives on a farm in dreary Kansas with her Uncle Henry and Aunt Em dreaming of faraway places (Over The Rainbow). One day the farmhouse, with Dorothy inside, is swept off by a tornado to Munchkin land in the Land of Oz. The falling house kills the cruel ruler of the Munchkins, the Wicked Witch of the East. The Munchkins and the Sorceress of the North greet Dorothy (Ding-Dong! The Witch Is Dead and Munchkin Land). The Sorceress tells Dorothy that she will have to go to the Emerald City to ask the great Wizard of Oz to help her return home. The Wicked Witch of the West, sister of the late Wicked Witch of the East, vows revenge upon Dorothy.
Dorothy meets the Scarecrow and the Tin Woodman. The Scarecrow wants to get a brain, and the Tin Woodman needs a heart (If I Only Had a Brain/If I Only Had a Heart). Dorothy suggests that the Wizard can help them too (We’re Off to See the Wizard). They then meet the Cowardly Lion (If I Only Had the Nerve). The four friends travel down the yellow brick road, having been warned of the lions, tigers, bears and the fantastical jitterbugs who are controlled by the Wicked Witch. The three friends meet a lion who lacks courage, and they invite him to join them. When the jitterbugs attack, Dorothy appeals to the Sorceress of the North, who freezes the jitterbugs (The Jitterbug).
The friends finally reach the Emerald City, where they meet Lord Growlie, his daughter Gloria and the Royal Army of Oz. Lord Growlie warns that if someone bothers the Wizard with a foolish request, he may destroy them. After a tour (The Merry Old Land of Oz; Evening Star), the friends meet the Wizard. He is very frightening and says that, before he will help them, they must kill the Wicked Witch of the West. As Dorothy and her new friends travel to the castle of the Wicked Witch, she sends various foes to hamper or attack them, but they manage to persevere. The witch eventually captures Dorothy, and her friends rush to try to rescue her, disguising themselves as ghosts. The witch is not fooled and intends to shrink Dorothy and her friends with a magic potion in her cauldron. Thinking fast, Dorothy pushes the witch into the cauldron. The water shrinks the Wicked Witch away to nothing (Ding-Dong! The Witch Is Dead(reprise)).
The friends return to the Emerald City, but the Wizard tries to put them off. The Wizard turns out to be an ordinary old man who had journeyed to Oz from Omaha long ago. However, the Wizard provides the Scarecrow, the Tin Woodman and the Cowardly Lion with a diploma, a watch to show large heartedness, and a medal of “courage”, respectively, and convinces them all that these items solve their problems. In order to help Dorothy get home, the Wizard personally takes her in his new rocket ship.


Premiere Production: Created for the Municipal Theatre in St. Louis, Missouri (the Muny) in 1942 and revived there several times, this is the very first stage adaptation following the 1939 release of the famous MGM movie of THE WIZARD OF OZ. The first Muny production featured Evelyn Wycoff as Dorothy and Al Downing as the Munchkin Mayor.