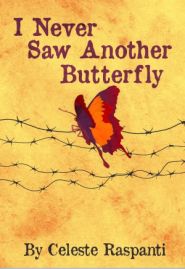 I Never Saw Another Butterfly

Such, such a yellow Is carried lightly way up high. It went away I'm sure because / It wished to kiss the world goodbye. For seven weeks I've lived in here / Penned up inside this ghetto, But I have found my people here / The dandelions call to me And the white chestnut candles in the court. Only I never saw another butterfly.


Over 15,000 Jewish children passed through Terezin, and only about a hundred were still alive when Terezin was liberated at the end of the war.
One of the survivors, Raja, having lived through it all, teaching the children when there was nothing to teach with, helping to give them hope when there was little enough reason for hope, creating a little world of laughter, of flowers and butterflies behind the barbed wire, tells the true story of the children. It's her play and it's theirs.
There were no butterflies at Terezin, of course, but for the children, butterflies became a symbol of defiance, making it possible for them to live on and play happily while waiting to be transported.
Author's Note: The operetta actually produced in Terezin was Brunidbar based on a well-known Czech folktale. The author created a folktale with a similar theme called Ludvik to be used in the play to avoid copyright infringement issues. The music for Ludvik is not available, but folk songs are usually in public domain and very simply scored. Directors might use any public domain folk song melody and write their own words that carry out the theme of the operetta.
REVIEWS:

"We were honored to have Michael (Raja Englanderova's son), his wife and two children attend our festival performance in White Rock. Raja's grandchildren didn't know about their grandmother's past and were totally enthralled with the production. Raja wrote to her son and told him that she was very happy that her grandchildren were going to see this play."