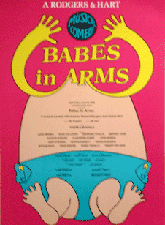 This quintessential 'Hey, kids, let's put on a show!' musical boasts one of the greatest scores ever written.


This quintessential 'Hey, kids, let's put on a show!' musical boasts one of the greatest scores ever written.

Set at a summer stock theatre, the plot concerns a group of young apprentices and their conviction to mount the original revue they've created while dodging the underhanded attempts of the surly theatre owner to squash their efforts at every turn.

Further complications are provided by the overbearing stage mother of a beautiful ex-child star and the inflated ego of a hack southern playwright. But of course the show must go on, and so it does in a resolution of comeuppance, reconciliation and romance.

This version is the 1959 adaptation by George Oppenheimer.
The Original 1937 version is also available. Please specify which version you would like when ordering.
REVIEWS:

"BABES IN ARMS is almost too enjoyable for a theatergoer's good!"

"Pace, humor and presence that belies its age...there hasn't been a musical written in this decade with anywhere near as many first class numbers."

"A score that is altogether superb...fresh, youthful, and utterly captivating."

"It is cheering to rediscover the authentic joys of this 1937 Rodgers and Hart musical. An exhilarating hymn to youth... Hart's acerbic wit perfectly counterpoints Rodgers' innate romanticism, and his lyrics are a triumph of ingenious wordplay."

"A pleasant outing featuring one of Broadway's most memorable scores."

"The show is charming, the numbers sizzle, what more can you ask?"