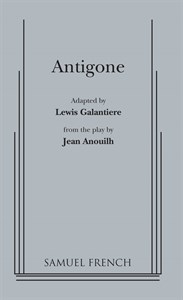 "Its dimensions are noble, its intentions uncompromising"


Produced in modern dress in New York with Katherine Cornell and Sir Cedric Hardwicke, the Galantiere version of the Greek legend comes from a Paris that suffered under the heel of tyranny.
The play's parallels to modern times are exciting and provocative.
REVIEWS:

"Its dimensions are noble, its intentions uncompromising."

Premiere Production: Galantiere's adaptation of Anouilh's Antigone was first presented on Broadway by Katharine Cornell in association with Gilbert Miller at the Cort Theatre in New York City on February 19, 1946. It was directed by Guthrie McClintic.