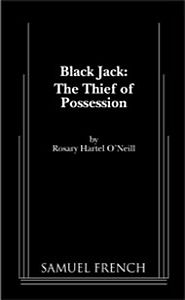 Black Jack: The Thief of Possession

Black Jack the Thief of Possession exposes the greedy machinations of an eccentric Southern family squeezed into the close quarters of a Mississippi paddlewheel cruise ship for the New Year's holiday.

Matriarch Irene Dubonnet is determined to unravel the mystery of why her gorgeous daughter thinks she is a 19th century poet. Kaitlyn is channeling the poet Baudelaire, and hiding a secret.

Family members don costumes for New Year's Eve, casting off their old identities and trying to figure a new way to face Kaitlin's disturbing news with a buoyant attitude.

Blackjack is a sequel to O'Neill's card plays Wishing Aces, and Solitaire. The selective setting of deck of a paddleboat provides atmospheric staging possibilities for sounds and flashing lights.

The dialogue has a poetic quality and intensity of meaning that even surpasses its three predecessors. O'Neill finds a bombshell combination of '90s sexual dialogue, psychology, and occult metaphysics to move her plot line along.