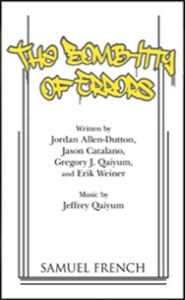 A rap version of Shakespeare's Comedy of Errors that pulses with wit, savvy and a sublime sense of its own ridiculousness... You'll be enchanted.

The Bomb-itty of Errors is an award-winning Ad-Rap-Tation, hip-hop theatre retelling of Shakespeare's The Comedy of Errors.

The show lasts one hour and thirty minutes and is part play and part rap concert. Refreshingly current but retaining the integrity of the original.
REVIEWS:

Bomb-itty of Errors gives the bard's slapstick farce a Generation-Y rejuvenation...scores very high on sexy-party index...You're carried along by the energetic tumble of words.

Bomb-itty is witty, lewd and altogether new. Think 'The Beastie Boys from Syracuse'.

Nothing short of brilliant. Clever writing, rhythmic flow, witty musical allusions and intelligent humor...the show is thoroughly entertaining.' - MTV'A rap version of Shakespeare's Comedy of Errors that pulses with wit, savvy and a sublime sense of its own ridiculousness...You'll be enchanted.

A stroke of genius...the language fizzes with new life, it's irreverent and yet in tune with Shakespeare's original, it's clever and witty and fast.

This fantastic show is one of the most entertaining, slick and inventive you'll see on the Fringe this year—and it has some clever insights to shed on the Bard's classic farce too...Does what so many productions fail to do—it makes Shakespeare funny. Not just chuckling, yes-I-see-this-part-is-meant-to-be-comical funny, but laugh out loud, hollering and cheering funny...The language is as clever, sharp and twisty as Shakespeare's.