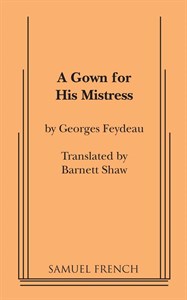 Gown for His Mistress, A

Dr. Moulineaux has been out all night in a futile attempt to meet his mistress Suzanne.

Dr. Moulineaux has been out all night in a futile attempt to meet his mistress Suzanne. He tells his wife he has been with Bassinet who is near death, but in walks Bassinet. He decides it is no longer wise to have Suzanne pretend to be a patient and rents an apartment that formerly belonged to a dressmaker. He and Suzanne are discovered in this hide away by her husband, so the doctor poses as a dressmaker and is caught in a desperate entanglement when his wife, his mother in law, Bassinet and Bassinet's wife appear. Moulineaux's household is in an uproar but he manages to lie his way out of it all with the help of Bassinet, who has a photograph that seems to solve everything.
This farce has outstanding roles and is successful played as a 1900's period piece or in a modern setting.