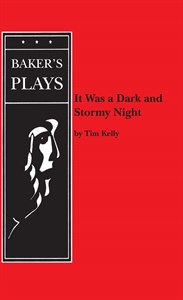 It Was a Dark and Stormy Night


There's dirty work afoot at Ye Olde Wayside Inn, home of the eccentric Saltmarshes, Hepzibah and Arabelia, Cousin Ebenezer, and old Uncle Silas, oldest living lunatic in Massachusetts. The inn is also haunted by the ghost of an old soldier who deserted Washington at Valley Forge.

Foul weather turns Cousin Ebenezer grim and dangerous, and he lures victims to the inn to get revenge for a past wrong. So when a storm forces several strangers to take shelter at the Inn, the chilling - or is it killing? - time begins! Among those forced to spend a grim night at the inn are a hard-nosed detective, some young nurses who think that Uncle Silas is their patient (he isn't), a couple of college students, a state trooper, and a key witness to a brutal crime.

But not everyone is what he or she appears to be - and who is that skeleton in the wheelchair and why is it wearing a bridal veil? Who will survive this dark and stormy night? Sure to delight all those who love their mystery with a twist and a giggle.
REVIEWS:

Premiere Production: It Was a Dark and Stormy Night was first performed on February 11, 1988 by the Coldwater Community Theater at the historic Tibbits Opera House in Coldwater, Michigan.