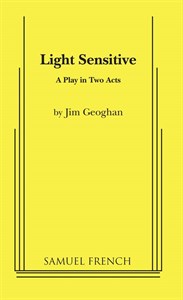 Geoghan brings his characters to life and the audience to its feet cheering.

Thomas Hanratty, lifelong resident of Hell's Kitchen and once the most dangerous white cab driver in New York, was blinded eight years ago in a drunken accident and is fading into a routine of self pity and alcohol.

His bartender and only friend, who was partly responsible for the accident, is moving to Vermont with a new lady friend, but he can't abandon Tom. He recruits an unattractive, slightly handicapped volunteer reader from the Lighthouse who battles her way through Tom's shell. By the second act, they are falling in love. His buddy returns with tales of his 'Christmas from hell' in Vermont, and doubt arises as to who will hold the number one position in Tom's life.
REVIEWS:

Geoghan brings his characters to life and the audience to its feet cheering.