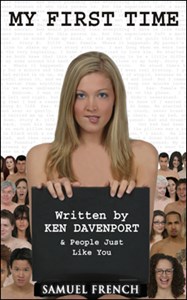 Funny and touching to sweet, sexy and silly!


"I remember my first sexual experience. I was alone at the time!" (Story #6509)
"I still have the Metallica shirt he wore that night." (Story #23960)
"File mine under clumsy and awkward!" (Story #4294)
My First Time features four actors in hysterical and heartbreaking stories about first sexual experiences written by real people. In 1998, a decade before blogging began, a website was created that allowed people to anonymously share their own true stories about their First Times.
The website became an instant phenomenon as over 40,000 stories poured in from around the globe that were silly, sweet, absurd, funny, heterosexual, homosexual, shy, sexy and everything in between. And now, these true stories and all of the unique characters in them are brought to life by four actors in this acclaimed 90 minute play from Ken Davenport, producer of Altar Boyz and creator of The Awesome 80s Prom.
REVIEWS:

Funny and touching to sweet, sexy and silly!

One of the most entertaining plays I've seen this year.

Premiere Production: My First Time premiered Off Broadway at New World Stages in New York in July 2007 under the direction of Ken Davenport.