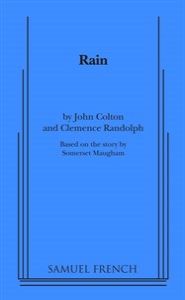 This is the foreboding tale about a missionary who encounters a raucous prostitute on a quarantined Pacific isle.

This is the foreboding tale about a missionary who encounters a raucous prostitute on a quarantined Pacific isle. Her contempt for him changes when she realizes that he has discovered bits of her life and can have her returned to prison in the States. So she plays up to him and asks to be forgiven and converted.

The missionary deserts his wife and another white couple for several days as he prays Sadie into a sickly stupor. She is truly contrite, and resolves to give up her life of sin. But on the last night, after she and the Reverend enter her room to pray, something happens. The next day Sadie is her same blatant self again, accusing all men of being pigs, and that the Reverend is discovered on the beach, a suicide.


Premiere Production: Rain was produced at the Garrick Theatre, London, on 12th May, 1925.