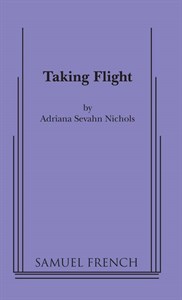 
First there was Mary and Rhoda, then Thelma and Louise, and now Adriana and Rhonda, two loveable and unforgettable friends. One, searching for the goddess and her shamanic roots, the other, planning her epic 'Godfather meets the Mists of Avalon' wedding, until 9/11 changes everything, leaving one in a hospital bed and the other intent on doing whatever it takes to save her friend.

In this award winning play, "Sevan joins the ranks of the best," (SD Union Tribune) as she takes you on a deeply moving, hilarious, and courageous journey into the depth of friendship, the challenge of care-giving, and the resilience of the human spirit. This "enthralling play is an example of how good a one person show can be." BackStage) During the "80 minutes of tremendous theatre satisfaction," (SD Theatre Scene) you will discover why the heart is the strongest muscle we have in our bodies and experience why Pulitzer Prize winning playwright, Nilo Cruz, named Taking Flight, "a magnificent piece for the theatre...an allegory of our time."
REVIEWS:

Adriana Sevan....is an energetic, endearing, enthusiastic, intriguing writer and performer. She craftily mixes comedy with tragedy...using the art and power of the spoken word. Out of it comes a message for mourners as well as survivors.

An inviting character study with a cinematic air...has all the earmarks of a Hollywood chic pic, but pays dividends in the theatre through rich description and exacting language. This work has a healthy life ahead of it.

...enthralling play...Sevan is a remarkable actor and storyteller. She flows seamlessly between portraying herself and the other character...Her strong charisma and her ability to keep the pace fast without feeling rushed are impressive. The tightly written script is honest and unafraid to jump radically from dark moments to humorous ones. The play is ultimately about not giving up...a celebration of life...and an example of how good a one person show can be. Kirk Douglas came onstage and praised her talent and her bravery. He was right on both accounts.