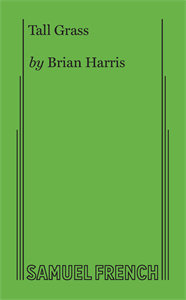 Unpredictable Tall Tales! Three surreal notions of the things we do for love.


Tall Grass is a dark comedy comprised of three one-act plays. Each play requires two males and a female and the same three actors can play the roles for each play.

The Business Proposal begins with a botched marriage proposal by a nice young man to his type-A girlfriend, who instead informs him that she has just accepted a position to become his boss. Over the next six-months the two try to sort out what they really want out of their professional and personal lives. The solution comes as a surprise, both to themselves and to the audience. The play also features a comic waiter and some voice-overs which can be done by the same actor.

The Gerbil is the story of a burglar caught breaking into the home of a dysfunctional couple, whose love for their daughter is the glue keeping their marriage together. The brutal ending reveals the harm their marriage has taken on the daughter, although she never appears on stage.

In Tall Grass we find an octogenarian couple fighting to maintain their independence. The arrival of a mysterious social worker tests the true extent of their resolve.
REVIEWS:

Farce is Brian Harris' métier – it allows the brutality of each relationship to creep up on you, heightening the dramatic tension in a way that Neil LaBute's handling of similar themes cannot.

Juicy, Entertaining and Dangerous! A woman becomes her boyfriend's boss, a man catches a burglar in his home, a con artist tries to dupe an elderly couple – each play veers towards violence and dark humor. The fizzy energy of a romantic comedy...a threatening sexual vibe!

Unpredictable Tall Tales! Three surreal notions of the things we do for love.

The dark, brutal underbelly of humanity is present in each character, perhaps making for a devastating look at modern life. Brian Harris' dialogue is fast, full of life, and showing these characters in all their complexities in such a short amount of time.

Premiere Production: Tall Grass was first presented Off Broadway by Roger Alan Gindi in association with Nutmeg Productions at The Beckett Theatre at Theatre Row in New York City. The director was Nick Corley.