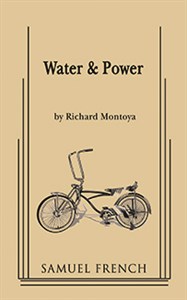 A hard working immigrant father wants better for his sons, twins named Water and Power. He wants them to be like Mr. Mullholand – deciding where the water flows in this desert pueblo. From the Mother Ditch in Chinatown, to the arroyos and ravines that would become Dodgers Stadium, L.A. re-invents herself faster than a Hollywood soundstage. History is cemented over and stars fade in a blaze of glory, but Water and Power will always be remembered -- all will know how the eastside rolls! Everything the brothers stand for hangs in the balance as they meet in room #13 at the Motel Paradise on the eastern edge of Sunset Boulevard. That's a part of the boulevard you never want to find yourself in on a dark and rainy night. L.A.'s not for everybody...

Water & Power is modern noir. What emerges from the long shadows of a rainy night is as mysterious as what will never see the light of day. Who is the Power behind the Power? How does Water flow in a desert? Who controls the streets, cops, gangs or gangsters in suits and ties? Nothing is concrete in L.A. except the river.
REVIEWS:

"Admirers of the group's unique blend of Chicano-inflected, spoken-word-erupting performance art needn't worry that they've lost sight of their signature gifts. Water & Power daringly tries to bundle these elements into a theatrical experience that veers inevitably toward tragedy."