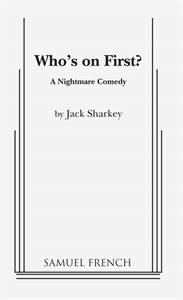 Four people find themselves reliving one horrible hour over and over as themselves, as Japanese, as British aristocrats, as gangsters, and almost anything else you can think of. Camille is giving the party. Don shows up in a jealous funk about his wife, Alice, whom he suspects of seeing another man. When Alice and Ben have arrived, it turns out their relationship is innocent. But by the time Don realizes this he has already shot Ben, Alice and even Camille. Camille wishes that things might have turned out differently and that is what happens. All concerned find themselves back at the party's beginning again and again doomed to live that same hour over and over again until they get it right.

Is it all an accident? Or is their dilemma part of someone's fiendish plan? A labyrinth of hilarity exits to a shocker of an ending.

Who's on First? was first presented at the Country Club Comedy Theatre, Mount Prospect, Illinois, on September 17, 1975. It was directed by Tom Ventriss.