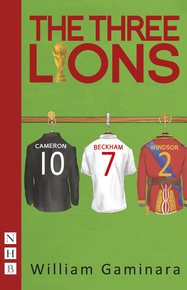 A sharp, hilarious behind-the-scenes glimpse of diplomacy in action, centering on England's bid for the 2018 World Cup.


A sharp, hilarious behind-the-scenes glimpse of diplomacy in action, centering on England's bid for the 2018 World Cup.

A footballer, a prince and a prime minister walk into a hotel room...

David Beckham, Prince William and David Cameron are in Zurich the night before England's bid for the 2018 World Cup. Between them they thrash out a plan that will woo FIFA and bring the beautiful game home. But as precious minutes tick by things start to go disastrously and deliciously wrong. Whatever else is at stake, this is more, much more, than a question of sport...

William Gaminara's play The Three Lions was first performed at the Pleasance Courtyard, Edinburgh, in 2013. It was revived at the St James Theatre, London, in 2015.
REVIEWS:

"Blisteringly funny… even if you're not a footie fan you'll find this a thoroughly enjoyable evening."

"A funny and inventive farce… offers plenty of laughs."

"Good fun... as perfectly timed as a Beckham free kick."