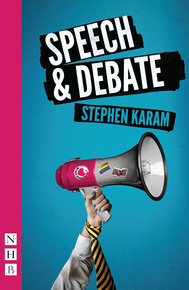 A fiercely funny play by the Tony Award-winning author of The Humans.


A fiercely funny play by the Tony Award-winning author of The Humans.

Three misfit teenagers are brought together by a sex scandal in their school, with nobody taking them seriously until they speak out – with hilarious consequences.

Living in a social media minefield, where peers are judgmental and adults are dictatorial and condescending, Howie, Solomon and Diwata grapple with homophobia, online privacy and how to get the lead in the school play.

Stephen Karam's Speech & Debate was first performed Off-Broadway at Roundabout Underground in 2007. It received its European premiere at the Trafalgar Studios, London, in 2017, produced by Defibrillator.
REVIEWS:

"The pace is nigh-on perfect… Stephen Karam has a talent for making serious things seriously funny."

"Comically unfolds the mysteries and peculiarities of today’s youth."

"A triumph...hilarious, cliché-free, and immensely entertaining."

"Bristling with vitality, wicked humour, terrific dialogue and a direct pipeline into the zeitgeist of contemporary youth."

"Very funny... Karam has an excellent ear for the earnestness of teenagers – and for the absurdity within such earnestness."

"A coming-of-age drama that looks at the difficulties of coming out but also self-expression and self-regard in those tricky teen years when individuals are desperately attempting to find themselves… some cracking jokes and intriguing situations."