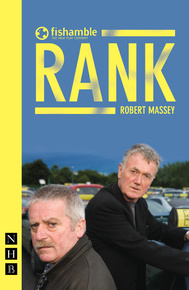 Carl, a youngish but overweight Dublin taxi driver, owes Jackie three grand in gambling debts. Jackie wants the money, and he wants it now, not least because an armed robbery he has master-minded has just gone badly wrong. From there it is all downhill for Carl and his father-in-law George. And not in a good way.

Robert Massey's play Rank was first staged by Fishamble: The New Play Company in October 2008 as part of the Dublin Theatre Festival. It transferred to the Tricycle Theatre, London, in November 2008.
REVIEWS: