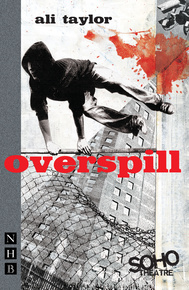 A poetic, explosive thriller about three young men on a night out that ends in violence.

In Bromley every Friday night, same time and place, Potts, Baron and Finch get ready for their weekly dose of booze, birds and burgers. But their night out takes a dramatic and terrifying twist when an explosion rocks the town centre, and a suspicious population points the finger at them.

"Overspill is set in Bromley, but it could be set in any town anywhere in the UK. There are hundreds of Bromleys in Britain… These are the towns that millions of us grow up in." - Ali Taylor

Ali Taylor's play Overspill was the winner of Metamorphosis 08, a competition organised by Bromley's theatre, The Churchill. It was first performed at The Churchill in June 2008, transferring to Soho Theatre, London, in October 2008.
REVIEWS:

"Ali Taylor's slice of urban life is small but thrilling. It is driven by a pulsating rhythm, a sense of place, a menacing undercurrent of casual violence waiting to erupt, and a layered story that suggests the lads' friendship was about to be blown apart by other factors as adolescence gives way to adulthood. The writing is gritty and sweaty, with a tom cat swagger and cut with half-rhymes and littered with assonance and alliteration... a tiny gem."