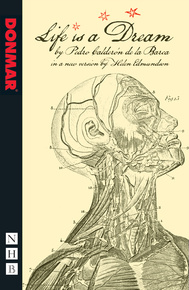 Life is a Dream


A classic from the Spanish Golden Age, Calderón's richly poetic, epic masterpiece explores illusion, reality, fate and destiny against the backdrop of a mythical Polish kingdom.

To protect the country from the horrors prophesied, the young Prince Segismundo is condemned for all eternity to be shut away from his country and his birthright. Banished to a secret world high in the mountains and cut off from the sun, he can only dream of a life reversed: of palaces, empires, freedom – revenge…

Helen Edmundson's version of Calderón's Life is a Dream was premiered at the Donmar Warehouse, London, in 2009.
REVIEWS:

"Rich, haunting drama... one of the great works of the Spanish golden age, yet it also seems to look forward to such modern dramatic concerns as the flexible nature of reality and the possibility of freedom in a world apparently governed by fate."

"Extraordinary and fascinating... a superb adaptation by Helen Edmundson."