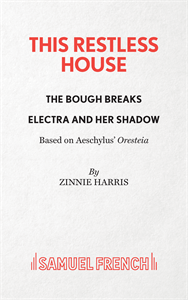 Part of This Restless House by Zinnie Harris.
Based on Aeschylus’ Oresteia.


Aeschylus' Oresteia opens with Agamemnon sacrificing his daughter to the gods; an act which sets in motion a bloody cycle of revenge and counter-revenge. When he in turn is killed at the hands of his wife Clytemnestra, their son Orestes takes up the mantle of avenging his father, continuing the bloodshed until peace is ultimately found in the rule of law.

Zinnie Harris reimagines this ancient drama, using a contemporary sensibility to rework the stories, placing the women in the centre. Orestes’ leading role is replaced by his sister Electra, who as a young child witnesses her father’s murder and is compelled to take justice into her own hands until she too must flee the Furies.

The three plays that comprise This Restless House can be performed on their own or as part of a continuous evening. Part one being Agamemnon’s Return plays on its own, then parts two and three The Bough Breaks and Electra And Her Shadow play as different parts of the same evening.


Premiere Production: This Restless House was first performed at the Citizens Theatre in May, 2016.