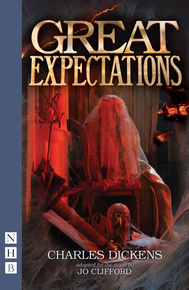 A beautifully simple adaptation of one of Dickens's best-loved novels, bringing it thrillingly to life for the stage.


A beautifully simple adaptation of one of Dickens's best-loved novels, bringing it thrillingly to life for the stage.

When the orphan Pip meets the convict Magwitch in a graveyard and is forced to help him escape, his life takes a series of unexpected turns. Invited to the house of the mysterious Miss Havisham, he falls in love with her adopted daughter, the beautiful but cold-hearted Estella. Then the generosity of an unknown benefactor sends him to London to become a gentleman. But the truth behind his change of fortune, once revealed, is not what Pip expects...

Jo Clifford's adaptation of Great Expectations was first performed at Richmond Theatre, London, in 2012, before transferring to the West End.

Eminently actable and stageable, this version is also ideal for schools and amateur theatre companies.
REVIEWS:

"What is so admirable... is that it decisively shrugs off the many screen adaptations to make something that is pure theatre."

"Breathtaking... one feels transported back to the Victorian era."

"Arresting... the adaptation is a model of its kind."

"An incredibly cohesive and careful adaptation."

"Clifford's script is a miracle of intelligent compression that wraps itself elegantly round every essential element in the story."