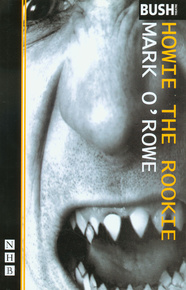 A white-knuckle ride through a nightmare Dublin, where enemies and allies are interchangeable.

A white-knuckle ride through a nightmare Dublin, where enemies and allies are interchangeable.

First we meet Howie. He tells us how, one night, he gets caught up in a gang intent on beating up Rookie. He's supposed to be baby-sitting his five-year-old brother, but he goes just the same. They beat up Rookie. Howie returns to discover a horrible accident has happened to the little boy. Then we hear the story from Rookie's point of view...

Mark O'Rowe's play Howie the Rookie was first performed at the Bush Theatre, London, in February 1999. It won the George Devine Award for Most Promising Playwright and the Rooney Prize for Irish Literature.
REVIEWS:

"Grabs you by the collar and head-butts you into submission."

"A magnificent mix of violence and poignancy."

"Startling... there are shades of Homer's Odyssey in the sweep of this telling, or of Joyce's Ulysses in the elevation of ordinary detail to heroic form."

"[Has] the lip-smacking relish and the whooping vulgarity of Behan, Joyce or Flann O'Brien."