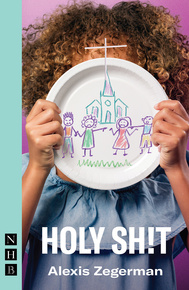 "I’m the one who has the responsibility of moulding this child into a non-fucked-up human being."

Simone and Sam will do anything to get their daughter into the local Church of England school. Juliet and Nick agree to show them the ropes.
The bonds of family, faith and friendship are stretched to breaking point as four forty-somethings wrestle for school places.
An acerbic, dark comedy, Alexis Zegerman's play Holy Sh!t premiered in 2018 as the first production at the newly renovated Kiln Theatre, London, formerly Tricycle Theatre, in a production directed by Artistic Director Indhu Rubasingham.
REVIEWS:

"Has bags of energy and attack… Zegerman has a sharp eye for middle-class hypocrisy."

"Well-crafted… an angry play for an angry age."

"This astringent comedy is provocatively topical."

"The jokes exude a powerful tang of truth, and there are moments of deep emotion that bring tears to your eyes… what turns this light comedy of manners into something darker, more emotive and more interesting, is Zegerman’s willingness to explore not only belief, but also prejudice."