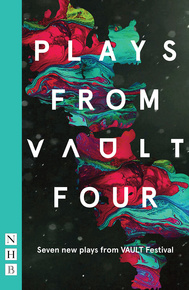 An anthology of seven of the best plays from VAULT Festival 2019, London's biggest and most exciting arts festival.

An anthology of seven of the best plays from VAULT Festival 2019, London's biggest and most exciting arts festival.

3 Billion Seconds by Maud Dromgoole is a hilarious, macabre love story about a pregnant couple of activists attempting to offset the carbon footprint of their unborn baby's life.

Alcatraz by Nathan Lucky Wood is a thrilling play about family and social care that follows Sandy on her daring, Christmas mission to emulate Clint Eastwood and bust her gran out of lock-up.

Collapsible by Margaret Perry is a funny, furious monologue about navigating a world that cares so much about you keeping it together, it doesn't notice you falling apart.

Inside Voices by Nabilah Said blends dark comedy and magic realism in its subversive portrayal of three Singaporean Muslim women challenging the bounds of freedom, feminism and faith in a place that isn't home.

Open by Christopher Adams and Timothy Allsop is a frank, refreshing romance that draws on interviews, conversation and private correspondence to explore the authors' real-life open marriage.

JERICHO by MALAPROP Theatre is an off-kilter, high-energy, form-pushing play about what pro-wrestling and politics have in common. It asks big questions in weird ways, like what can a pop-culture journalist do to stop the world burning down?

Thrown by Jodi Gray sees a child-psychologist attempting to record what she's spent her whole life trying to forget, as the memories of former patients collide with her own.