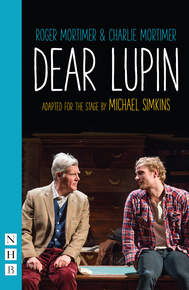 
Michael Simkins' immensely charming stage adaptation of Dear Lupin, the witty and touching collection of letters from a father to his son that became a huge bestseller, winner of The Sunday Times Humour Book of the Year.

Roger Mortimer's hilarious, touching, and always generous letters to his son, Charlie, are packed with crisp anecdotes and sharp observations. Spanning twenty-five years, their correspondence forms a memoir of their relationship, and an affectionate portrait of a time gone by.

Dear Lupin was adapted for the stage by best-selling author and actor Michael Simkins, revealing many more undocumented stories of the trials and tribulations of Charlie's youth and adulthood.

The play toured the UK in 2015, before a run in the West End at the Apollo Theatre, starring real-life father and son James Fox and Jack Fox.
REVIEWS:

"This charming tale of paternal love and genteel japes."

"A touching tribute to the rock-solid and wise affection of a funny, perhaps sometimes lonely, maverick father for his classically 'hopeless' son."