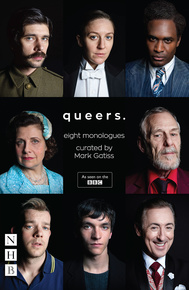 Queers celebrates a century of evolving social attitudes and political milestones in British gay history, as seen through the eyes of eight individuals.


These eight monologues can be licensed for performance together as a full-length show, individually, or in any combination.

A young soldier returning from the trenches of the First World War recollects a love that dare not speak its name. Almost one hundred years later, a groom-to-be prepares for his gay wedding.

Queers celebrates a century of evolving social attitudes and political milestones in British gay history, as seen through the eyes of eight individuals.

Poignant and personal, funny, tragic and riotous, these eight monologues for male and female performers cover major events – such as the Wolfenden Report of 1957, the HIV/AIDS crisis, and the debate over the age of consent – through deeply affecting and personal rites-of-passage stories.

This volume includes:
The Man on the Platform by Mark Gatiss
The Perfect Gentleman by Jackie Clune
Safest Spot in Town by Keith Jarrett
Missing Alice by Jon Bradfield
I Miss the War by Matthew Baldwin
More Anger by Brian Fillis
A Grand Day Out by Michael Dennis
Something Borrowed by Gareth McLean
REVIEWS:

"An unbeatable series of monologues – funny, filthy, mournful, celebratory, predatory, bathetic, heroic – of the travails and, yes, fun had in the days before this particular love could speak its name."