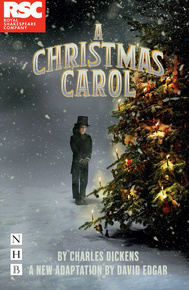 One ghostly Christmas night, cold-hearted businessman Ebenezer Scrooge gets the fright of his life, discovers the truth about himself, and learns to love his neighbour.
This adaptation by David Edgar of the Charles Dickens classic, A Christmas Carol – one of the best-loved stories ever written – rediscovers the social conscience of the timeless tale. It was premiered by the Royal Shakespeare Company in Stratford-upon-Avon for Christmas 2017, returning for Christmas 2018.
REVIEWS:

"David Edgar's adaptation retains the overall message of redemption while introducing a lot of humour as a counterpoint to the social commentary… dark, yet heartwarming."

"A mix of wit and grit… a Christmas stocking of a show: full of goodies alongside an evergreen message about the importance of empathy."

"A festive delight… Edgar's adaptation lacks none of the textural depth and emotional resonance of Dickens' original piece of social commentary… entertaining, lively and full of fun."

"An inventive version of Dickens's great seasonal fable… you would have to be quite a Scrooge not to fall for it."

"There is much to savour… Dickens's message about the need to treat poverty as a rectifiable evil rather than a moral failing comes through loud and clear."