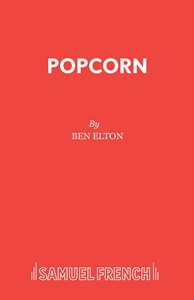 
Set in the Beverly Hills home of Oscar winning movie director Bruce Delamitri, Popcorn is a satirical comedy thriller with the firepower of a hit squad. When notorious killers Wayne and Scout interrupt Bruce's passionate introduction to Brooke Daniels, a nude model and actress, they want more than an autograph from their cinematic idol. Wayne intends to use Bruce's "art" as justification for murder. Events are disrupted by the arrival of Bruce's soon-to-be ex-wife and spoiled teenager daughter and his producer. However, Wayne means to succeed whatever the cost.
REVIEWS:

"This is Ben Elton at his gruesome, satirical best."

Premiere Production: Popcorn was first presented in association with The West Yorkshire Playhouse at the Nottingham Playhouse in September, 1996. It was subsequently presented by Phil McIntyre at the Apollo Theatre, London, on 2nd April, 1997.