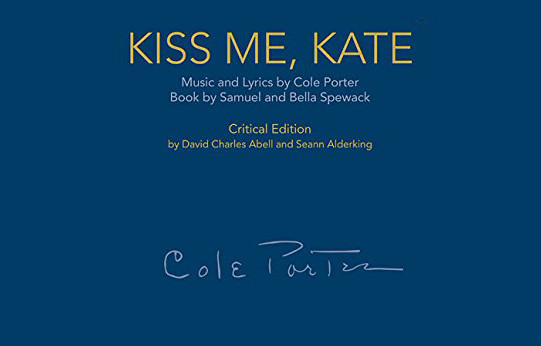 Cole Porter's classic 1948 show, Kiss Me, Kate, is one of the jewels in Broadway's crown and it is now available for rent in a Critical Edition, edited by David Charles Abell and Seann Alderkin. The Crirical Edition includes an orchestral score, piano-vocal score, and orchestra parts, all newly engraved to the highest standards. In addition to the complete show (the original Broadway script from 1948), this edition provides alternate keys and dance routines in an appendix and contains a wealth of explanatory notes and other documentation, which are an invaluable new resource for scholars and theatre professionals.

In a Baltimore theatre, the cast of a musical version of William Shakespeare's The Taming of the Shrew rehearses for the opening of the show that evening (Another Op'nin', Another Show). Egotistical director/producer/leading man Fred Graham stars as Petruchio, and his movie star ex-wife, Lilli Vanessi, is playing Katherine. The two argue incessantly, and Lilli is particularly angered by Fred's interest in the attractive young actress Lois Lane, who is playing Bianca. After the rehearsal, Lois's boyfriend Bill appears; he is play Lucentio, but he missed the rehearsal because he was gambling. He tells her that he signed a $10,000 IOU in Fred's name, and Lois reprimands him (What Can't You Behave?).

Before the opening, Fred and Lilli meet backstage, and Lilli shows off her engagement ring from Washington insider Harrison Howell, reminding Fred that it's the anniversary of their divorce. They recall the operetta in which they met (Wunderbar). Two gangsters show up to collect the $10,000 IOU, and Fred replies that he never signed it. The gangsters say they'll give him time to remember it and will return later. In her dressing room, Lilli receives flowers from Fred, and she realized that she is still "So In Love." Fred tries to prevent Lilli from reading the card that came with the flowers, because he actually intended them for Lois. But Lilli takes the card with her onstage, saying she will read it later.

The show begins (We Open in Venice). Baptista, Katherine and Bianca's wealthy father, will not allow his younger daughter Bianca to marry his older daughter Katherine is married. But Kate is shrewish and ill tempered, and no man desires to marry her. Three suitors -- Lucentio, Hortensio, and Gremio -- try to woo Bianca, and she says that she would marry any of them (Tom, Dick, or Harry). Petruchio, a friend of Lucentio, arrives, expressing a desire to marry into wealth (I've Come to Wive it Wealthily in Padua). The suitors hatch a plan for him to marry Kate.
Kate, however, has no intentions of getting married (I Hate Men). Nonetheless, Petruchio attempts to woo her (Were Thine That Special Face). Offstage, Lilli has an opportunity to read the card. She walks on stage off-cue and begins hitting Fred, who, along with the other actors, tries to remain in character as Baptista grants Petruchio permission to marry Kate.
Offstage, Lilli furiously declares she is leaving the show. However, the gangsters have reappeared, and Fred tells them that if Lilli quits, he'll have to close the show and won't be able to pay them the $10,000. The gangsters, at gunpoint, force Lilli to stay.

Onstage, Bianca and Lucentio dance together (We Sing of Love). Petruchio and Kate, newly wed, exit the church, followed by the gangsters, now dressed in Shakespearean costume as they keep an eye on Lilli. Petruchio implores Kate to kiss him, and she refuses. He lifts her over his shoulder and carries her offstage while she pummels his shoulder with her fists (Kiss Me, Kate).

During the show's intermission, the cast and crew relax in the alley behind the theater. Paul, Fred's assistant, along with a couple of other crew members, lament that it's "Too Darn Hot" to meet their lovers that night. The play continues, and Petruchio exhausted from 'taming' Katherine, mourns for his now-lost bachelor life (Where Is the Life That Late I Led?).
Offstage, Lilli's fiancé Harrison Howell looks for her. He runs into Lois, and she recognizes him as a former lover but promises not to tell Lilli. Bill is shocked to overhear this, but Lois tells him that even if she is involved with other men, she is faithful to him in her own way (Always True to You in My Fashion). Lilli tries to explain to Howell that she is being forced to stay at the theatre by the gangsters, but Howell doesn't believe her and wants to discuss wedding plans. Fred insidiously points out how boring Lilli's life with Howell will be compared to the theatre. Bill sings a love song he has written for Lois (Bianca).

The gangsters discover that their boss has been killed, so the IOU is no longer valid. Lilli leaves -- without Howell -- as Fred unsuccessfully tries to convince her to stay (So In Love - Reprise). The gangsters get caught on stage and improvise a tribute to the Bard (Brush Up Your Shakespeare). The company prepares for the conclusion of the play, the wedding of Bianca and Lucentio, despite Lilli's absence. Just in time, Lilli enters and delivers Kate's final speech beautifully (I Am Ashamed That Women Are So Simple). Fred and Lilli wordlessly reconcile on stage, and the plays ends with the two couples united (Finale).

Kiss Me, Kate played for 1,077 performances on Broadway at the New Century Theatre and for 501 performances in London at the Coliseum Theatre. The original cast included Alfred Drake, Patricia Morison, Lisa Kirk and Harold Lang. The original cast album issued in 1948 by Columbia Records had the distinction of being the very first Broadway cast recording to be issued on LP.
Kiss Me, Kate was revived in 1999 at the Martin Beck Theatre on Broadway, where it played for 881 performances starring Brian Stokes Mitchell and Marin Mazzie, and at the Victoria Palace Theatre in London, where it played for about 300 performances starring Brent Barrett and Marin Mazzie.