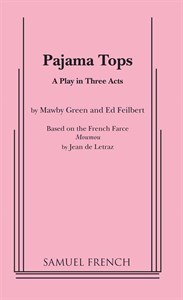 It played three years in Paris and five in Hollywood before coming to New York, followed by 10 years of coast-to-coast and six in London, making it one of the longest runs on record!

The plot is all fun. The husband is planning a business trip for philandering purposes; his wife secretly invites this same voluptuous girl to spend the weekend. The husband is trapped. Out of the blue an old friend appears, with hands aflutter, followed by a gendarme who delights in cherchez les femmes. There is also a devilish looking butler, a maid practicing to be  a cocotte, and some wildly artful dodging, all calculated to keep the audience laughing.
REVIEWS:

"The best entertainment in London."