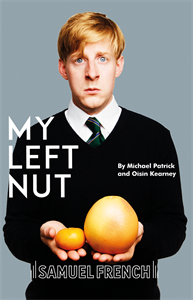 400 millilitres. That's how much liquid was drained from Michael's left testicle when he was a teenager. That's more than a can of coke. He should have told someone sooner, but who could he turn to? His dad died ten years ago and besides, school is full of rumours about what the giant bulge in his trousers actually is. Who wants to stop that?

My Left Nut was developed as part of Show in a Bag, an artist development initiative of Dublin Fringe, Fishamble: The New Play Company and Irish Theatre Institute to resource theatre makers and actors. Additional support was provided through Prime Cut Productions' Reveal programme.
First performed at Bewley's Café Theatre at the Dublin Fringe Festival, September 2017.