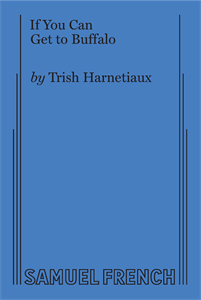 If You Can Get to Buffalo

"If You Can Get to Baffalo finally deflates the Utopian pretences of cyberspace by reminding us that human technology also carries in it its makers' most craven impulses."


Few know that way back in the day, 1993 to be exact, a text-based social network "mansion" called LambdaMOO was hijacked by a "Mr. Bungle," who single-handedly detonated the new world utopia by misbehaving most grievously at a virtial party.

Somewhat based on the real story of the first instance of virtual rape, the attempt to deal with the perpetrator, and the awkward Charlie Rose episode that followed, If You Can Get to Buffalo explores our fascination with hiding behind a keyboard, the impulse to be bad, and the anonymity that made it all possible.
REVIEWS:

"A fine morsel of eclectic humor. Fast moving and funny, witty and thought provoking, If You Can Get to Buffalo takes us back to the beginnings of the internet."

"If You Can Get to Buffalo finally deflates the Utopian pretences of cyberspace by reminding us that human technology also carries in it its makers' most craven impulses."

"The early '90s was the dinosaur age of the Internet: Dial-up modems whined, the 'information superhighway' was common parlance, and multi-user dimensions -- the fledgling ancestors of virtual worlds -- were just emerging. Trish Harnetiaux isn't nostalgic for that time in her new play, If You Can Get to Buffalo, but she makes an amusingly pertinent case for revisiting it, and more specifically, LambdaMOO, a nascent chatroom that witnessed one of the world's first virtual crimes and began the debate on internet rights."

"It is strange to think back on the internet as a text-based phenomenon, and Harnetiaux brilliantly captures the ambivalence of that moment right between the pre-internet world and our world, where we were inundated with it, drowning in it, allowing this now-ancient-seeming past to articulate the questions that are even more pressing today."

Premiere Production: If You Can Get to Buffalo premiered in a production by The Acme Company in Baltimore, MD in May 2013 under the direction of Eric Nightengale.