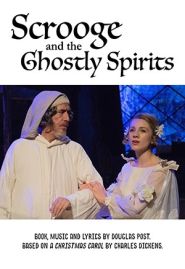 Scrooge and the Ghostly Spirits


Poor Ebenezer Scrooge. It is Christmas Eve and everyone in London is finding merriment in the season except for the miserly soul who moved through the chambers that once belonged to his deceased partner. But when the Ghost of Jacob Marley suddenly appears and is followed in rapid succession by the Ghosts of Christmas Past, Present and Yet to Come, Scrooge's cynical world is turned upside down as he sees who he was, who he is, and what he may hope to become.

This musical adaptation of Charles Dickens' classic tale strips the story down to its essence while adding 17 songs that speak to the heart and to the holidays. It follows the transformation of a man of business into a person who truly understands that mankind is his one and only business.
REVIEWS:

"There are many times...when the songs take moments of the familiar script to heights they have rarely reached in other productions."

"Delightful family entertainment that is perfect for the holiday season."

"The beautiful, haunting music played by three onstage musicians, serves to uplift the characters and the story."