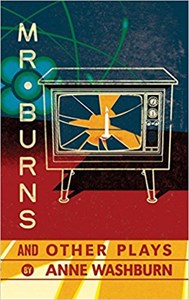 What will endure when the cataclysm arrives -- when the grid fails, society crumbles, and we're faced with the task of rebuilding?

After the collapse of civilization, a group of survivors share a campfire and begin to piece together the plot of "The Simpsons" episode "Cape Feare" entirely from memory. 7 years later, this and other snippets of pop culture (sitcom plots, commercials, jingles, and pop songs) have become the live entertainment of a post-apocalyptic society, sincerely trying to hold onto its past. 75 years later, these are the myths and legends from which new forms of performance are created.

A paean to live theater, and the resilience of Bart Simpson through the ages, Mr. Burns is an animated exploration of how the pop culture of one era might evolve into the mythology of another.


Premiere Production: Mr. Burns, a post-electric play received its world premiere at the Wooly Mammoth Theater Company in Washington DC in May, 2012, and had its New York City debut at Playwrights Horizons in August, 2013 under the direction of Steve Cosson.