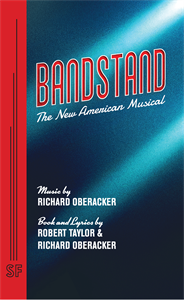 The boys are back, but their war isn't over.
Bandstand is an unflinching and honest new musical about confronting the cost of war and finding salvation in the notes of a song.
This show is currently unavailable for licensing. To be informed as soon as it's available, please contact our office to join the waitlist.

It's 1945. American soldiers return home to ticker tape parades and overjoyed families; Private First Class Donny Novitski, singer and songwriter, returns with the hope of rebuilding his life with just the shirt on his back and a dream in his heart.

When NBC announces a national competition to find the nation's next swing band sensation, Donny joins forces with a motley group of fellow veterans, and together they form a band unlike any the nation has ever seen. However, complicated relationships, the demands of the competition, and the challenging after-effects of war may break these musicians. But, when Donny meets a beautiful, young singer named Julia, he finds the perfect harmony in words and music that could take this band of brothers all the way to the live radio broadcast finale in New York City. Victory will require every ounce of talent, stamina, and raw nerve that these musicians possess.
REVIEWS:

"Bandstand is an open-hearted musical that will have you clapping your hands and clenching your fists, tapping your toes and blinking back tears."

"A resonant, original musical that dances the delicate balance between nostalgia and disillusion. The show defies you not to be moved by its valiant band of brothers."

Premiere Production: Bandstand premiered at the Papermill Playhouse in Millburn, NJ in October, 2015 before transferring to Broadway in April, 2017 under the direction of Andy Blankenbuehler.