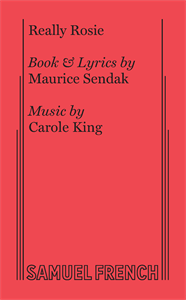 From the brilliant minds of Maurice Sendak (Where the Wild Things Are) and Grammy-winning singer/songwriter Carole King, Really Rosie is a jewel for children and adults.


Rosie, the sassiest kid on her block of Brooklyn's Avenue P, entertains herself and her friends by acting out showbiz fantasies, notably directing and starring in an Oscar-winning movie.

Written by the author and illustrator of Where the Wild Things Are and other popular children's books, Really Rosie is a jewel for children and adults. Author Maurice Sendak is the winner of a Caldecott Medal, National Book Award, and a National Medal of the Arts. Composer Carole King is the winner of a National Academy of Songwriters Lifetime Achievement Award, a Grammy Trustees Award, the Songwriters Hall of Fame, and the Library of Congress's Gershwin Award for Popular Song.
REVIEWS:

"There is such juicy vitality, such insouciant grace, such frolicking exploration of the waist high jungle of childhood [...] You will regret not being able to wrap up a large chunk of the proceedings and take them home with you."

A half-hour animated television special aired on CBS TV in February 1975. It was directed by Maurice Sendak, with Carole King voicing the title character. An album based on the songs by King and lyrics by Sendak is available on Ode/Epic/SME Records. In the animated special, only the first seven songs and Really Rosie (Reprise) were showcased. Sendak expanded the piece for London and Washington, DC, stage productions in 1978, and an off-Broadway production, directed and choreographed by Patricia Birch with designs by Sendak, which opened on October 14, 1980, at the Westside Theatre, where it ran for 274 performances.