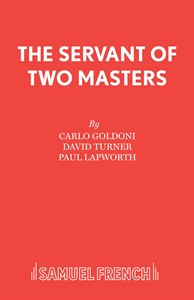 Servant of Two Masters, The

The story concerns the terrible complications wrought by the servant Traffaldino when he gets himself jobs with two different people at the same time.

The life of the Italian dramatist Carlo Goldoni almost exactly spanned the eighteenth century, a time when the traditional comedia dell'arte style was in decline and 'written' drama as we know it was beginning. Goldoni skilfully adapted the comedia dell'arte pattern to his own very funny plots, and the most famous of the resulting plays is The Servant of Two Masters.

The story concerns the terrible complications wrought by the servant Traffaldino when he gets himself jobs with two different people at the same time. Not all the complications are of his making; one of his 'masters' is in fact a lady in disguise, and the other master is her lover, but Truffaldino doesn't know this. This is only one of the comic elements in a plot that sparkles with invention. This adaptation brilliantly matches the spirit of the play. It was made for a production that starred Tommy Steele as Truffaldino, and is entirely in the modern idiom. Added to the text is a very helpful article on the historic background on the play, with full notes on characterization and suggestions for comic business.


Premiere Production: The Servant of Two Masters was first presented at the Queen's Theatre in London by Michael Codron on 18th December, 1968.